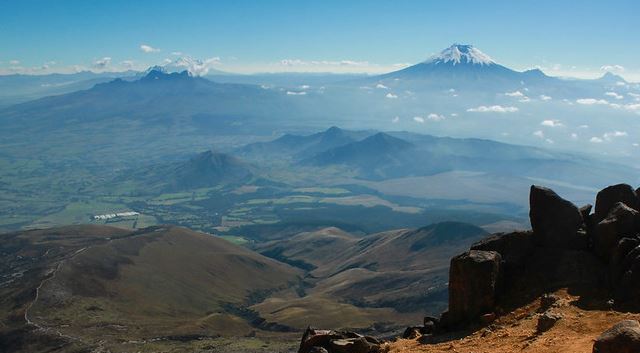 ♦ AVENUE of the VOLCANOES, the emblematic corridor of snow-tipped volcanoes — seven peaks more than 17,000 ft. high and two still very active — that runs 200 miles south of Quito between two parallel cordilleras, linking the Andean highlands to the coast.  When flying from Quito to Guayaquil, for the best inflight panorama of volcanoes — Antisana, Cotopaxi, Tungurahua, El Altar, Sangay — reserve a seat on the left; however, you’ll have to look right to see the massive heights of Chimborazo, at 20,565 ft. Ecuador’s highest peak.

♦ “A” of course is also for AMAZONIA, which fills Ecuador’s northeastern Ecuador’s corner of the Amazon Basin one of the most biologically rich places on earth. Coca Airport is the main air gateway to a bevy of — ecolodges and the boarding point for the Ecuador’s newest Amazon River cruiser, the luxury Anakonda. The superstar in the area is Yasuni National Park, a UNESCO Biosphere Reserve, playground to giant otters, jaguars and caimans and home territory of the unique Waorani culture, whose territorial lands lie roughly 50 miles south of Coca.  Ecuador’s Amazonia also embraces the Cuyabeno Wildlife Reserve, 234 sq. miles (605,000 hectares) of primary forest, rivers and lagoons, and home to an incredible variety of animal and plant life.  Five different ethnic groups live within the reserve: the Siona, Secoya, Cofan, Quichua, Shuar — each with its own culture and language.