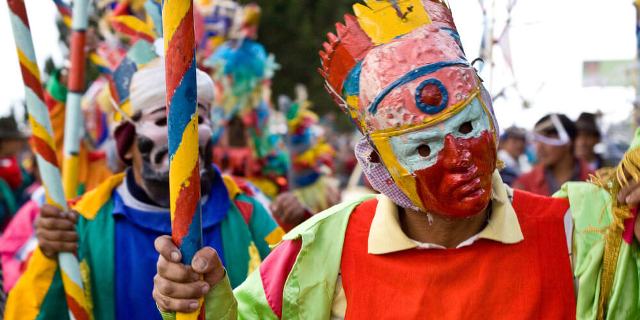 ♦ FERIAS & FIESTAS provide five-star occasions to learn traditions, meet people, and just plain have fun while joining the party.   The following events are worth noting on a travel planning calendar:

February:  Carnaval, is nationwide. Public concerts, parades, city fairs and heavy drinking are all part of the festivities. The town of Guaranda (Bolivar province) is particularly famous for its celebrations as is Esmeraldas. And during Carnival week, Ambato celebrates its Fiesta de la Fruta y de las Flores, when the town is indeed all decked out with parading floats of fruit and flowers, plus dancing, theater exhibitions, and of course the obligatory beauty contest. During the week before Lent.

April: Holy Week is nationwide, with religious processions held in cities and towns. Quito’s Good Friday procession through the Old Town is especially grand and ornate. Week before Easter: April 10, 2020.

June: Inti Raymi. Indigenous peoples of South America have always revered the sun. The Inca left intact their celebration of the summer solstice, or Inti Raymi. It is celebrated throughout the northern Sierra, with Otavalo having the most famous celebrations—which seem to blend into the Catholic celebration of St. John the Baptist on June 24.

July:  Fiestas de Guayaquil, and occasion when the country’s largest city throws a large party for itself. Wild street parties, concerts, fireworks last for a week around the official holiday, July 26.  Festival of San Pedro and San Pablo festivities are held in Cayambe, Pomasqui and Tabacundo on July 29.

September: Fiestas de Mama Negra in Latacunga, a sleepy city 55 miles south of Quito that comes alive during its celebrations of the Virgen de la Merced, better known locally as Mama Negra.  Ecuadorians flock here and fill the streets with dancing and parades and fireworks and carnival rides. The festivities are unique in their mixing of indigenous, Spanish and even African influences.  Attention TMLA Delegates: Festivities will be in play right after Travel Mart.

November: The village of El Quinche, in the vicinity of Quito, hosts an ornate church and sanctuary dedicated to the Virgin of Qinche. It draws crowds of pilgrims year round searching the Virgin’s blessing, but people pour in from all over particularly on November 21 one for the processions honoring the Virgin.

December: Fiestas de Quito. The capital city pulls out all the stops to commemorate the city’s founding. Celebrations last through the first and most of the second week of December. Concerts and street fairs can be found all over the city; world-class bullfights are held in the Plaza de Toros. December 6 is the official date.

♦ FREE-WHEELING is a weekly happening in Quito, known as ciclopaseo and taking place on Sunday, when between 9 am and 2 pm, thousands of cyclists take to the car-free streets: specifically, the entire length of Avenida Amazonas and most of the Old Town. Bicycles are available for hire, and cyclists  following the entire route will have biked around 18 miles.