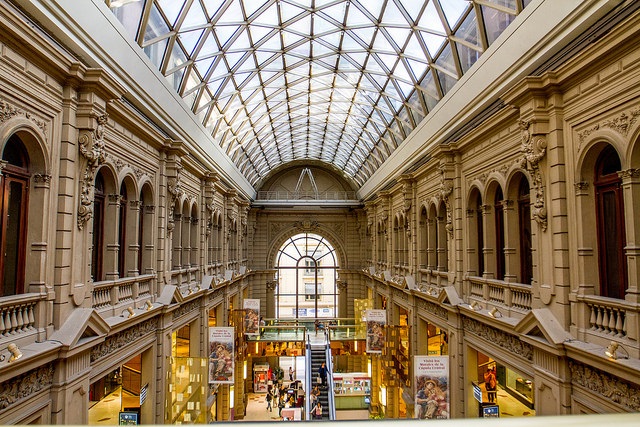 Mall-Mania:  Visitors can learn a lot about a city by dropping in at local grocery and liquor stores, patronizing a neighborhood laundromat or beauty salon. Malls too can be places to not only shop, but to mix and meet with the locals. (Many malls operate free shuttle from hotels for mall-bound guests.) ♦  Alto Palermo, loaded with clothing stores, most of which are geared to the female shopper; there’s a Starbuck’s on site.  ♦  Paseo Alcorta in Palermo Chico is a good place for finding trendy fashions, although the highlight of this mall is the large and well-stocked Carrefour supermarket.  ♦  Galerias Pacifico is the mall most visited by tourists, due to its central location on Florida at Cordoba.  ♦  Patio Bullrich is Recoleta’s upscale mall where, among several levels of clothing stores one finds a good wine store, movie theaters, cafes and restaurants.  ♦  Abasto Shopping, with its soaring art deco architecture of what was once the city’s central market, is the largest mall in Buenos Aires with over 230 shops, movie theaters and a top-floor food court.  (Museo de los Ninos is here)

Manzana de las Luces or City Block of Enlightenment, (near Plaza de Mayo) is a history-packed area that served as the intellectual center of the city in the 17th and 18th centuries. The land was granted to the Jesuits in 1616, and their elegant San Ignacio church with its beautiful altar is the oldest in B.A.  The church is the only building on this block that can be visited without going on a tour, and on weekend afternoons, tours of this city block include the Jesuits’ underground tunnels, however.

Masticar Food Festival  brings together some of Buenos Aires’ most highly acclaimed chefs and restaurants, who set up shop in the La Rural expo grounds. Held during the first half of July, the three-day eventmixes it up, celebrating food truck gourmet culture with live bands, DJs and other festive accompaniments.